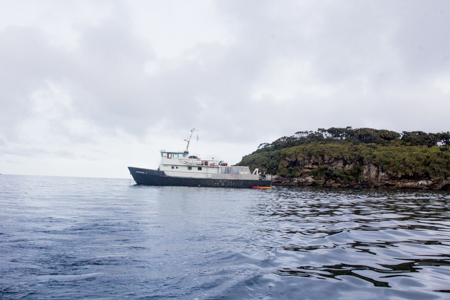 I joined them aboard “Flightless” in Halfmoon Bay with a party of Christchurch Photographers, and we spent the next week exploring Port Adventure, Lords River, Port Pegasus and Broad Bay.

So the following is a tiny part of what we saw and did. There will be links to our “Place Names” pages for extra information and location details.

From Halfmoon Bay we steamed down the eastern coast to Port Adventure, a brief look into the Heron River, then around to Abrahams Bosom to anchor for the night. 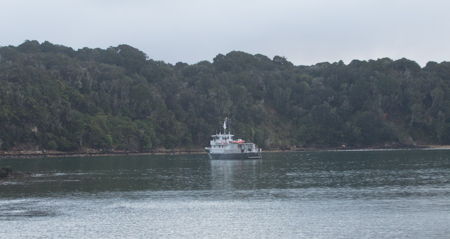 We went ashore, to walk along “Salty Beach”, and some stayed until dark, as Kiwi come out to forrage for sandhoppers… we did see prints from the previous night, but none while were there.
“Salty Beach” is a local name, not to be found on any maps I know of.

Next Morning, Up anchor, and down to Lords River

Lords River is the longest “navigable” river on Stewart Island, and was always a must do when we were

chartering. And so it was on this trip. We had a stunning day, and spent it exploring by inflatable and RIB, getting to within a short distance of the upper limits of boat small travel. The river is quite tidal, and is best explored at high tide. Our photographers must bless digital cameras as had they been using film I’m sure their bank accounts would have taken a major hit

We left “The River” late-ish in the afternoon for the run down to Port Pegasus, passing “Black Rock” which is very cleverly sited almost exactly in a direct line between Lords River Heads and Seal Point. Surely just to keep

Pegasus Skyline from the wheelhouse of Flightless

mariners on their toes.

The next day after some morning fishing we went into South Arm and then went ashore to climb Bald Cone, returning in the late afternoon.  I flagged the final part of the climb, as my knees aren’t so good on steep down slopes, especially if we had to hurry down before dark. But still great to get up and botanise amongst the

“The Gogs” on a fine day. What we would like to have seen

The next morning started of with light rain, and just got heavier. Never-the-less we set of up into Cooks Arm and Seal Creek in the tenders with the idea of walking from the head of Seal Creek at least up to where we would get a good view of Gog, Magog, and the Hielanman. But cold and wet dissuaded us from the walk, though I was able to show Maria where to set off from. No photos for me,

Later in the day the rain eased off and we went into Disappointment Cove and the short walk over the hill and down to Communication Cove in Broad Bay. A couple went snorkelling, while the rest of us explored the beach area.

I’ve many “favourite” places in Port Pegasus, but Small Craft is I think extra special. And after we left that seemed to be the consensus from everyone as well. All wished they could have had much more time.

From Small Craft Sean took “Flightless” around Broad Head into Broad Bay, and anchored in the entrance to Burial Cove. From there we went by tender into “The Settlement“.

By Kayak and Inflatable to the Settlement

This small, almost landlocked lagoon” is normally accessed overland by either of 2 tracks from Port Pegasus. I’ve walked in many times, by Helo once, and this was only the third time by sea. It was apparently once home to a shore whaling station, but there is no evidence that they ever actually caught a whale. And looking at the location, together with the weather and tidal streams, that’s easy to understand.
Many years ago a couple of hunters I had down here told me they had come across what looked like the stone exterior foundations of a small hut, high up on Broad Head … a whale lookout station perhaps.

We were due to fly out by Helo mid afternoon on the last day, so were going to spend the morning

exploring North Arm and the Bell Topper Falls. We woke to a good breeze of South Easterly, and rain, Then the helo couldn’t fly… low viz in Foveaux Straits, so we had another night, and flew out early the next day

Thank You Flightless and Crew 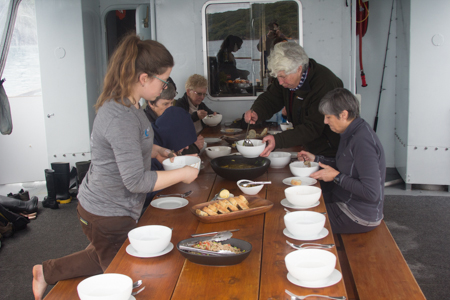 For me it was a wonderful chance to revisit one of my favourite places on Stewart Island. So a very big thank you to Maria & Sean, and to Courtney, Anna and Chris. Their professionalism, attention to detail, and just overall good humour and very obvious love of sharing such special places with their guests is outstanding. Flightless is considerably larger than was Talisker … perhaps 4 times the internal volume, so for me it was like living in a ball room. Courtneys meals are fabulous, and in fact I mentioned to Maria that Iris would be really grumpy if I took Courtney home with me ….. until Iris sampled the first meal. So it’s great to report that Pegasus 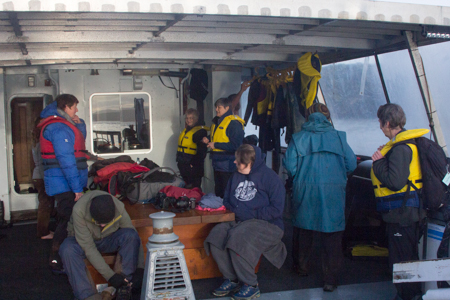 is within reach, for those who want to explore.. contact  www.puresalt.co.nz

Yesterday Flightless was back in Paterson Inlet, with the guests who had flown in when we left. Sean & Maria invited Iris & I out to Flightless (and Iris got to enjoy a Courtney lunch) . And then Iris and I took everyone for a guided tour of Ulva Island